In reference to comments about NiteFlirt traffic and traffic in general at phone sex sites, Jack’s comment:

I’m a caller, not a PSO. I’ve checked the Alexa traffic of NF vs Myphonesite. MPS is ranked 152,726 while NF is ranked 22,139 (global ratings). [By] these figures NF has a higher traffic. Or is there a catch? I don’t know whether these figures are significant.

As I’ve said, Alexa is imperfect; but that doesn’t mean it should be completely ignored either.

For example, this screen capture was taken by me back in November, when I made my first draft of this post. Note how MPS had already increased its rank from the October rank of 22,139 to 53,950. That means MPS is growing. (You can click the images to see larger, more easy-to-read images.) 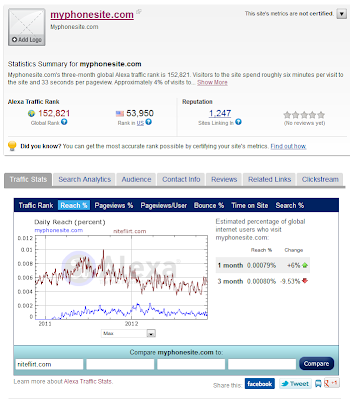 If you look at the Search Analytics tab for both NF and MPS, you will get a snapshot idea of what people had been searching for when they came to the sites. Clearly, specific NF users (both PSOs and client IDs) are commonly searched for in terms of finding NF itself (which lends more data in the direction of PSOs using the site), while the most common searching for MPS is related to the site’s name itself (and, currently, “sissy phone” is in the number four spot) which proves the MPS name is getting out there. 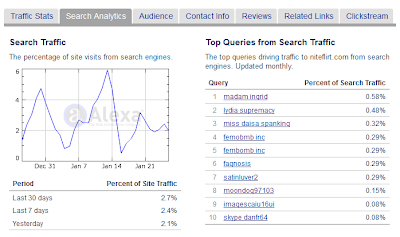 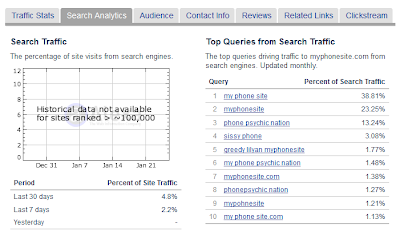 These screen captures were taken on 1/29/13; and are likely to change. So checking back again (and again) will yield varied results. That’s great stuff for data junkies — which is why I suggest moderation in any and all data consumption. (Periodic, but not fanatical, checking is wise to see if there’s something new to learn, something you might tweak to get better results. Over-zealous checking and rechecking is not only a huge time-suck, but likely only keeps you running in circles after your own tail.)

However, the reality of the phone sex business for independent PSOs is not about which platform site is the largest in terms of Alexa ranking or even traffic. Can you guess why it’s not?

Do you know what is important about phone sex platforms?

Do you know what is most important in terms of getting callers?

2 thoughts on “Who Has More Traffic? Which Phone Sex Platform Site Is Biggest?”